Browsing through Jane Sowerby’s Victorian Lace Today, I wondered about the origin of words for specific items of clothing – like a fichu. Sowerby has two different patterns for fichus, both lovely though I’m not sure I’d ever make one. Over the years I have seen patterns for women’s sontags and reticules – words we no longer use. Where did we get those words? Of course, where did we get the word “cardigan” or “raglan” to describe different kinds of sweaters?

Fichus were light weight, frequently diaphanous, scarves or very small shawls (generally triangular) pinned at a woman’s bodice worn in the 17th and 18th century. Supposedly for modesty (which I question given their frequently diaphanous nature) or warmth (ditto). 🙂 The word comes French ficher meaning to fix (with a pin) and from Latin fīgere meaning to fasten or fix. From Wikipedia’s display of 400 paintings of women wearing fichus, I did not see any knit or crocheted fichus. They all appeared woven; many were trimmed with lace. (You may prove me wrong; I didn’t intently study each of the images!)

I first heard about reticules when I read Gone With the Wind when I was 13. (Melanie Wilkes kept her smelling salts in one.) I figured out from context that it was some sort of purse and later learned it was a lady’s small drawstring handbag that became popular by the end of the 18th century. It was worn either tucked into the waist of a lady’s skirt or hanging from a wrist. It got its name from Latin rete which means net, which became reticulum or netted bag. Abraham’s Lady offers a crocheted reticule for purchase, though I have seen patterns for them in netting, crocheting and knitting in various textile magazines and in some fiber books. Rebecca Enoch’s Sock Baggie is similar to a reticule.

A raglan is a sweater design where the sleeves do not have seams but continue into the collar. The design was named for Fitzroy James Henry Somerset, 1st Baron Raglan. Lord Raglan was wounded in the Battle of Waterloo (1815), and had his right arm amputated. According to Ann Richards, “His tailor then designed a special short coat for him with a diagonal sleeve seam running from under the arm to the neckline making it easier for Lord Raglan to dress himself. With this simple innovation, a classic sweater shape was invented.” (Picture from Wikipedia) 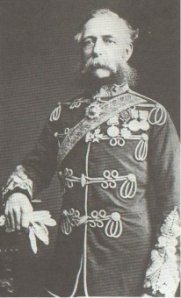 Most of us know what a cardigan is (a sweater or jacket that opens down the full length of the front), but where did the word come from? It was named after the Seventh Earl of Cardigan, James Thomas Brudenell (1797-1868), a British army officer, who led the charge of the Light Brigade (1854) during the Crimean War. (According to Ann Richards, he was a bit of a dandy.) Curiously, the Lord Raglan was the Earl of Cardigan’s superior at the charge of the Light Brigade. (Picture from Wikipedia) 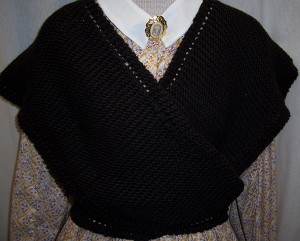 What about a sontag? This item of 19th century women’s clothing was similar to a knit or crocheted shawl that was wrapped and worn like a vest. It was not named for the 20th century writer Susan Sontag 🙂 but for the German soprano Henrietta Sontag (1806-1854). Again, I have seen patterns for sontags in Ravelry and knitting books and/or magazines, but you can also go to Abraham’s Lady (where I got this picture), scroll down to the bottom and you will find two patterns for sontags – one crocheted, the other knit. 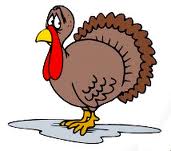 Snood …now there’s a great word! One definition is the fleshy wrinkled fold of skin hanging down over a turkey’s beak. (Picture from turkeyoff.com) However, it is also the name of a woman’s hair accessory!

In the 19th century, women would pull their hair back and tuck it into a snood – a small net-like cap designed to keep their hair in place. In Old and Middle English, snod meant headband.

To the right is a picture of U.S. Civil War surgeon Dr. Mary Walker; she is wearing a snood.

While I have seen many modern knit and crochet patterns for “snoods,” most of them are simply cowls – not snoods. Snoods did not wrap around women’s heads and necks for the purpose of warmth. (That would be the role of hats and shawls.)

Muffatees resemble long, fingerless mittens though with no thumb knit into it. Imagine wearing a sleeve that goes only from wrist to elbow. They were worn in the 19th century (and undoubtedly many others). For a good explanation, see this blog by Dances With Wools. If you would like to knit an authentic pair, here’s a pattern called “Diamond Muffatee” from Godey’s Lady’s Book and Magazine published in 1863 and available in Ravelry.

Nineteenth century ladies also wore mantles. As I child, I assumed it was a long narrow weaving that when not resting on the fireplace mantle was worn across a lady’s shoulders. I was wrong. Mantles were short cloaks worn by women. They were cut higher on either side allowing the wearer freer arm movement. (Picture from Why Not Then)

Gone With the Wind also introduced me to the chemise (or shimmy, for short). (When Scarlett O’Hara first sees Rhett Butler, she thinks he’s looking at her as if he knows what she looks like without that garment on. Melanie wears a shimmy that she gives to Scarlett to wrap around the head of the Yankee Scarlett shot.) Worn years before the Civil War (think Roman’s tunic), by the 19th century U.S. it was a women’s undergarment. It came from camisia, Latin for shirt. English workers wore it as a smock and the Irish called it léine. This was something interesting I learned from Wikipedia (italics mine):

A chemise, shift, or smock was usually sewn at home, by the women of a household. It was assembled from rectangles and triangles cut from one piece of cloth so as to leave no waste. The poor would wear skimpy chemises pieced from a narrow piece of rough cloth; while the rich might have voluminous chemises pieced from thin, smooth fine linen.

Last, but certainly not least, is bloomers. Bloomers were long baggy pants with narrow cuffs that ladies wore under their skirts (which could then be shortened a bit). The idea was that pants would provide modest covering while allowing the “new” American woman in the second latter half of the 19th century to participate in activities such as cycling and tennis. They were popularized by Amelia Jenks Bloomer (1818-1894), a U.S. women’s rights and temperance advocate, but she did not create them. They were the creation of Elizabeth Smith Miller of New York. (Photograph from www.nps.org)

All this makes me wonder what names we could give unusual articles of clothing or accessories that we design. Any thoughts? 🙂

This entry was posted in Crocheting, Knitting, Other Fiber Arts, Weaving and tagged Knitting & Crochet, weaving. Bookmark the permalink.

21 Responses to Name that Garment