It’s not just hats that are coming back into fashion. So are hat pins! 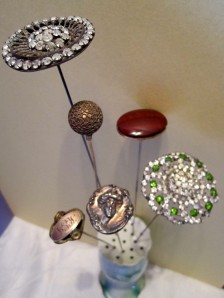 Starting before the Civil War, hat pins took the place of bonnet or hat strings and were used to secure straw hats. When ladies piled their hair up high, the pins secured their hats to their hair (not to their head). They were very popular around the turn of the century and became longer and more ornate. But many ladies continued to use hat pins.

As toddler (late 1950s) sitting on my mother’s knees on a rail car, I was fascinated by an ornate pin on the back of the hat worn by the lady in front of us. I reached out and pulled the pin all the way out when my mother hissed “Karen Berthine!” She startled me and I shoved the pin straight back in the lady’s hat – and into her head. (The beautiful hat pins and the hat pin holder in the picture above are available on eBay.)

While not usually used to pin a hat to a towering hair do, nowadays they are used as lapel pins, scarf and shawl pins, and hat decorations.

Fascinators are also making a comeback. According to Nancy Friedman’s blog, in “the 19th and early 20th centuries a fascinator was a lightweight knitted or crocheted headscarf.”

They reappeared in the 1960s. At that time, the towering upswept and teased “do’s” women wore (see pic to the left, source) simply didn’t allow hats to stay on well – for obvious reasons! So fascinators – little
hat-like objects d’art – perched on their hair. And they are making another comeback!

Fascinators can be charming and flirty, fun and elegant, as illustrated by the picture of Kate Middleton (now Her Royal Highness, The Duchess of Cambridge) to the right.

And, as the world recently learned at the wedding of Kate Middleton to Prince William of England, fascinators can be pretty darn scary too. (Pic at right – which I think of as a “Fascinator Gone Wrong” – comes from UK’s Daily Mail. )

Buying: Check out Etsy – for instance Georgina’s makes fun fascinators, and you can take a peek at some very pricey fascinators at Hatagories, including some made by Philip Treacy – one of the big names in fascinators who, I believe, designed the “Fascinator Gone Wrong” (my name for it – not Mr. Treacy’s) above. He has some amazing designs; you make want to look at his website. Another source for vintage facinators and/or hatpins is used clothing stores, antique stores and good hat stores! And, of course, there’s eBay – a another great place to look for antique fascinators and hatpins.

I bought a fascinator and a hat pin at Goorin Bros. The fascinator is attached to a thin head band and its decoration (feathers) hugs the side of my head. (It is similar to Knit and Purl Stitch’s fascinator.) I wore it only once before my daughter borrowed it. And she just had to have my hatpin. I haven’t seen them since.

This entry was posted in Crocheting, Knitting, Miscellany and tagged fascinators, hat pins. Bookmark the permalink.