Posted on January 7, 2017 by sweatyknitter

Two topics:  About Heddles and, below that, if you are interested in U.S. politics, About the U.S. Electoral College.

I set up my new (one previous owner) floor loom, a Gilmore 8-harness loom (54″ weaving width), and I saw I needed to lot more heddles. What is a heddle?

A floor loom has at least two shafts or harnesses, and on each are numerous heddles.  The

heddles separate the warp threads:  The warp threads (except for selvedge threads, if used), pass through heddles.  The pattern the weaver uses determines which warp threads go through a heddle on specific shafts and where.  Here’s a close up drawing of a harness and its heddles.

If you look at the top row of printing in the picture below, you can see where the harnesses sit on a loom (behind the beater): 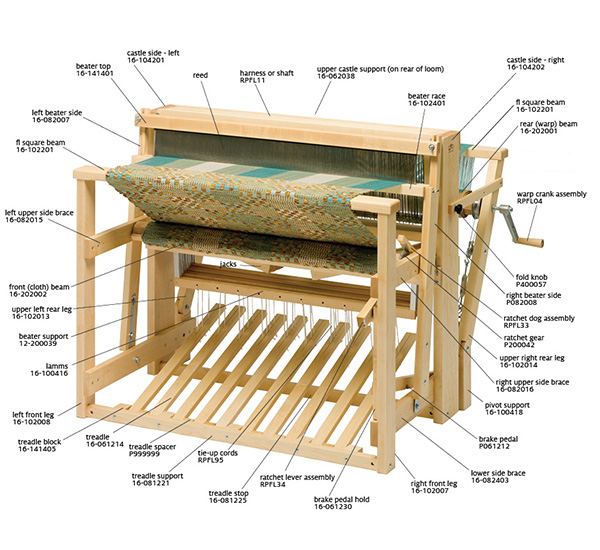 (Source of both pictures)

There are different kinds of heddles from which a weaver can choose. 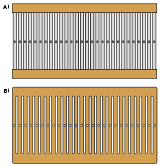 While the mainstay of many weaving devotees, many knitters and crocheters find using a small rigid heddle loom the perfect way to give weaving a try.   A rigid heddle loom uses a single shaft (usually).  The warp threads pass alternately through the eyes in the heddles and through the spaces between those heddles.  The heddles don’t move, just the shaft.  When the weaver raises the single shaft, the threads through the eyes go up.  When she lowers the shaft, they are lowered.

Two popular rigid heddle looms are Ashford’s  Knitters Loom.  Another is Schacht’s Cricket loom that I bought for Granddaughter F.  (I wove two projects on it.  Granddaughter F hasn’t touched it!)

Texsolv heddles, made from heat-treated polyester, are very popular among many weavers.  Far quieter than metal heddles, they are also very light, though for some jack looms their light weight could cause problems.  (Click here and here for some useful information on Texsolv heddles.)

are easy to find, though they can be hard on threads.  Weavers have an option on height of the eye.  Wire heddles slide on the heddle bar more easily than Texsolve heddles.

Inserted eye heddles are similar to wire heddles but easier on the threads:  The eyes have been dipped into solder, creating a smoother eye.  Many weavers working with hairy yarns find the yarn is less likely to tangle when going through these eyes.

ger made in the U.S. and more difficult to find.

Though not quiet like the Texsolv heddles, they are a good weight for jack looms.  Further, they lay flat into each other, which means weavers are able to pack a lot of these heddles onto the heddle bars – a benefit for weavers who work with densely packed warp threads.

So, which type of heddle did I go with?  I found two source with stashes of flat steel heddles and bought several hundred.  Then a weaving friend generously gifted me with a box of Steel Heddle Manufacturing Co. heddles!  (Thanks, SMN!)

As an aside, are you wondering about the origin of the word “heddle?”  According to Merriam-Webster, it is “probably alteration of Middle English helde, from Old English hefeld; akin to Old Norse hafald heddle, Old English hebban to lift.”

About the U.S. Electoral College

The U.S. Electoral College is a conundrum to many people, whether or not they’re Americans.  What is it and why does the U.S. have it?  First, some background.

When the Constitution was signed in Philadelphia, Pennsylvania, on September 17, 1787, it didn’t automatically go into effect.  It first had to be ratified by the states.  It would be 3 years before the 13 states ratified the Constitution and, as this chart illustrates, not all states overwhelmingly supported its ratification.

The debate over whether to ratify the constitution came to a head in Virginia and New York.  It coalesced around two opposing factions: people favoring a republic – that is, a democracy where people were best represented by elites – and those who sought a popular democracy – where all citizens (errr, i.e., free white male property owners) should have a equal voice in governance.

Could or should the “masses” (most of whom were uneducated yeoman) be entrusted with democratic tools?  Opposing the creation of a strong, centralized federal government, the Antifederalists thought they could.  The Federalists thought not and feared the instability of the democracy by the masses.

The Federalists won, in no small part by the arguments of Alexander Hamilton, John Jay and James Madison crafted in a series of persuasive essays called the Federalist Papers (U.S. Library of Congress), wherein they argued for a strong, centralized republican government with controls on popular democracy.

One control on direct democracy was that U.S. Senators were not popularly elected; they were appointed by the state legislatures.  This changed in 1913 with the 17th Amendment.

Another control on popular democracy was an “intermediate body of electors” as outlined by Alexander Hamilton in Federalist Paper No. 68.  Why?

[So] that the office of President will never fall to the lot of any man who is not in an eminent degree endowed with the requisite qualifications. Talents for low intrigue, and the little arts of popularity, may alone suffice to elevate a man to the first honors in a single State; but it will require other talents, and a different kind of merit, to establish him in the esteem and confidence of the whole Union, or of so considerable a portion of it as would be necessary to make him a successful candidate for the distinguished office of President of the United States.”

The result?  The Electoral College was a compromise between electing presidents by a popular vote of citizens and electing the president by a vote of elite representatives (i.e., Congress).

I’ve read Federalist Paper No. 68 many times.  Trump certainly is “not in an eminent degree endowed with the requisite qualifications” and has displayed – boasted of! – his “[t]alents for low intrigue and the little arts of popularity.”  Nonetheless, when the Electoral College met last month, Donald Trump received 304 votes and, though she won the popular vote by almost 3 million votes Hillary Clinton received 227 votes from the Electoral College.

This entry was posted in Miscellany, Weaving and tagged Electoral College, Heddles. Bookmark the permalink.

4 Responses to Heddles & the Electoral College